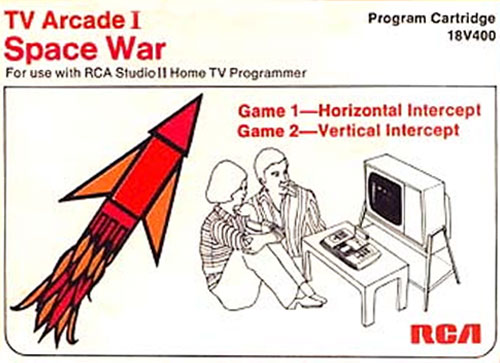 This black and white shoot-em-up was a separate cartridge for the RCA Studio II. As such it has been replicated as a game "ROM" file that you will need to load in separately.

To do this, simply click on the FILE drop down menu (top left of the emulator window) then click on OPEN. This should open up a filing-system window where you should see the file "SPACEW~1.ST2". This is the Space War game cartridge "ROM" file. Double click on this to begin.

Space War features two game variations. The first, started by pressing "1", is "Horizontal Intercept" for one player. Here you try to launch then crash a rocket into as many asteroids as you can within a 20 missile limit. Faster asteroids tend to score more highly as they pose a more difficult shot.

The second is "Vertical Intercept" for two players, started by pressing "3". This is perhaps the first ever home one-switch game, released in 1977. Here you compete against a friend to hit a vertically moving asteroid as many times as you can within a 30 second time limit. Hold your UP button to keep your rocket climbing, release to see it drop.

Vertical Intercept is a one-button game for two players so is ideal for play with an accessibility switch or two. Simply set Player One's switch to "2" and Player Two's to Numeric Keypad "8".

For your convenience JoyToKey has a "RCA Studio II" configuration that will work straight away with Playstation compatible controllers on Vertical Intercept. Here you should be able to connect a switch to the UP joystick socket for player 1 and the TRIANGLE socket for player 2.

More advanced users may like to try setting up a new configuration for Horizontal Intercept so that you can steer and launch your rocket from a Joystick or switches.